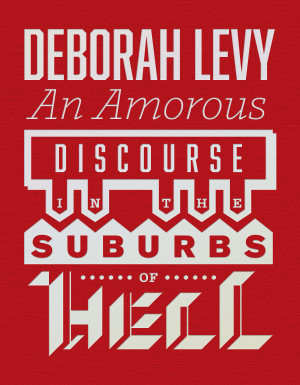 Video: Deborah Levy on An Amorous Discourse in the Suburbs of Hell

That image she uses of the troubled poet William Blake once having seen “a tree crammed with angels on Peckham Rye” could as easily be referring to her own tendency to see what actually is there, although the rest of us fail to notice. Her imagination is completely subversive. Knowing yet kindly, Levy is a daring writer. In this little film, beautifully shot in the ordered world of a garden set, Levy both reads from, and engages with, her poem which was originally published in 1990 and is now extended, more telling. She draws us in: the discussion between the angel and her reluctant host/lover is both intimate and public dilemma. It is choice: to play wild or to play safe.

Man Booker shortlisted in 2012 for Swimming Home, which was published by & Other Stories late in 2011 to some confusion as, initially, the title and publisher’s name gave observers the impression it was a volume of stories. The novel was immediately acknowledged as something different. I recall writing that in the hands of any number of less mercurial British writers it could have become a witty, middlebrow beach romp, but Levy has a Pinteresque dimension. She is also anarchic and reinvigorates the clichéd.

A famous couple, a poet and his war correspondent wife, in the company of their perplexed 14-year-old daughter rent a villa on the French Riviera. It all takes place during a July heatwave. The couple and their guests become aware of a body floating in the pool. The mother dives in and her daughter watches, reflecting: “Saving the lives of bloated bodies floating in rivers was probably the sort of thing

her mother did all the time…”

But the body bursts into life, it is a naked girl on a mission; she wants the poet to read the various poems she has written.

Swimming Home created a fuss. But Levy was calm; she was not a literary newcomer and had already had a career. Born in South Africa in 1959, the daughter of a politician who had moved his family to Britain when Levy was a child, she had first emerged with Ophelia and the Great Idea (1989), Swallowing Geography (1993) and The Unloved (1994) and her gifts as a playwright have enhanced her fiction with brilliant dialogue and characters that battle their demons.

A convincing sense of struggle and choices made, often the wrong one, is her theme. Her work has been performed by the Royal Shakespeare Company and as is obvious from our little film she knows how to hold an audience in her hand. Her presence is relaxed, yet theatrical. She has natural timing and her hushed tones of a storyteller with secrets to impart involves all of us in her conspiracy of narrative. Not surprisingly she looks to Angela Carter and

Levy’s narratives also echo the deliberate intent that drives fairytales to candidly logical conclusions, however ambivalent they may appear.

When Deborah Levy went quiet for close on 15 years, it was not because of writer’s block. She took time out to raise her daughters, to live and to think. And think she did. Never one to waste words, she summons a character in a sentence. In Swimming Home a disorganised caretaker working at the French holiday villa is deftly drawn: “Jurgen was a German hippy who was never exact about anything.” In the same narrative an elderly, world- weary doctor, Madeleine Sheridan, buys some caramelised nuts from a vendor at the beach, hoping they would “choke her to death”.

Black Vodka, a collection of 10 stories, was published in 2013, again by & Other Stories, and was shortlisted for the Frank O’Connor International Short Story competition. The title story was shortlisted for the 2012 BBC International Short Story Award. It is a small miracle. In it, the narrator gleefully points out: “It is usual for people attracted to each other to pretend they have full and busy lives but I have an incredible facility to wade through human shame with no shoes on.”

The garden shed has somehow been transformed into the residence of a kindly seer with insights about love and life. Levy reveals the instinct that makes writers that bit wiser, more intuitive, than rest of us. I would bet she has seen almost as many angels as William Blake….

An Amorous Discourse into the Suburbs of Hell is published by & Other Stories, £7.99.

A FILM BY: CHAMELEONEYE FILMS