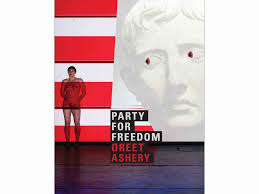 Part travelling troupe, part takeaway delivery service, part bizarre dream, this is a party like no other: a party for hire that costs nothing but demands your full investment.

A project by London-based artist Oreet Ashery, Party for Freedom is a performance and moving-image work for anyone to host and experience. It can take place in any private or public space from a sitting room to an office, a university or nightclub, for a minimum of 10 people. These people could be friends, colleagues or strangers if your party is somewhere public (don’t worry, there is help at hand to make sure your event is full and fun).

Exploring trash aesthetics, performances of liberation and the exposure of political ideas around nakedness, Party for Freedom interrogates the visual, cultural and political values of perceived threats to Western freedom.